Jump to navigation Jump to search 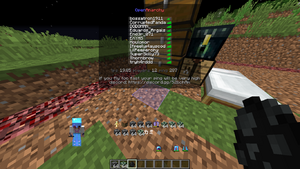 An inventory of an anonymized player (LilPeeperony), 2020.

The 2020 Backdoor is a backdoor that happened back in Early 2020 before Bob_dylanople gave up OpenAnarchy, giving out 32ks and other Illegals like Bedrock, Spawn Eggs and End Portal Frames.

Around March of 2020, Yelgab and Itaylo (Bob's Relative) went on Bob_dylanople's computer then made themselves OP, Creating bunch of Illegals like 32k Weapons and Stacked Shulkers, End Portal Frames, and Bedrock. This then got distributed to the whole server at the time. Bob_dylanople noticed it and had resetted some playerdatas that has Illegals in their inventory or Ender Chest. Rumors says that some Illegals are in unfound dupe stashes being distributed to 1/8 of the server regulars by a Group that maintains the Illegals.

Items that was created[edit | edit source]

Retrieved from "https://openanarchywiki.miraheze.org/w/index.php?title=2020_Backdoor&oldid=3867"
Cookies help us deliver our services. By using our services, you agree to our use of cookies.