Jump to navigation Jump to search

April Fools Map 2021, On 1st April, 2021. qbasty, the server's owner made the greatest joke of all time in oa history ever at the time wow haha funny. The April Fools Map 2021 is a temporary map for OpenAnarchy on 1st April as an April Fools Joke, Consisting of multiple changes of the server's version, mechanics, and exploits. Which then continued with qbasty saying the original map was corrupted and irreversible, with funny trollers in OA's Discord saying that Hypixel bought OpenAnarchy or 7b7t bought OA and will be merged, Because of the young playerbase of OpenAnarchy, many had believed the "Joke" was actually real. 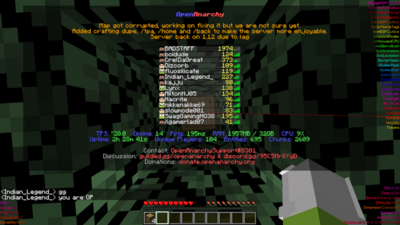 All players would have the skin of Hausemaster, qbasty, or _sowl.

Commands like /back, /spawn, /tpa had been added so the server is more "enjoyable". They also added a plugin that enables crafting dupe.

Multiple exploits were left unpatched and players can abuse them as much as they want. Because of this players would spam Bedrock blocks and End Portals everywhere, and make houses out of them. Stacked Items like totems and potion and 32k Swords are useable and will not reset, how it was acquired isn't explained yet.

Retrieved from "https://openanarchywiki.miraheze.org/w/index.php?title=April_Fools_Map_2021&oldid=3894"
Cookies help us deliver our services. By using our services, you agree to our use of cookies.