From OpenAnarchyWiki
(Redirected from Main Page)

Welcome to the OpenAnarchy Wiki!

OpenAnarchy is a "friendly" anarchy server run on 1.12.2 Spigot software.

The IP is openanarchy.org (as of December 2020) As of January 2021, there have been 75000+ unique accounts that have joined. OpenAnarchy's official Discord server: https://discord.gg/52bchAm

The OpenAnarchy Wiki was created by TheUnknown20 in December 2019, Currently owned by Honsda.

In the middle of 2017 Bob_dylanople created "TinyAnarchy", a 512x512 anarchy server. In July 2019 it was renamed and "OpenAnarchy" was created. On the 26th of July the map got deleted due to fluctis. Despite the problems this was still considered a golden age of the server. The server economy was stable. No players were too powerful and no dupes were active. 0 0 was relatively safe from spawnfags due to the low player count and large spawn radius.

The Server is then owned by daaaabears, and much historical figures (players lol) had became inactive. 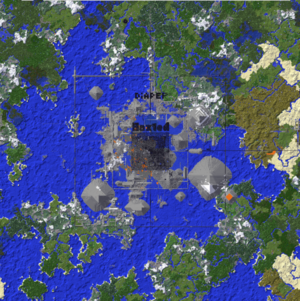 Even though OpenAnarchy is an anarchy server it doesn't mean that the wiki is also anarchy. Please use common sense.

NOTICE : If you don't login your IP Address will be visible to the public, admins can't do anything about it.

Retrieved from "https://openanarchywiki.miraheze.org/w/index.php?title=OpenAnarchy_Wiki&oldid=2489"
Cookies help us deliver our services. By using our services, you agree to our use of cookies.